Omigoodness...I cannot believe I have finally signed this painting as being complete. It has been really a project with a purpose and a history. I've done two other paintings of this pose and after completing the painting for her uncle in 2010, I decided that one day I would do one for myself. Captive Audience II - although showing the same little girl pose, she is now soon to be seven. The story behind the puppies is actually pretty amazing. Her mom fostered an abandoned mama Labrador from the shelter who had just given birth to seven puppies. The puppies were so brand new that their eyes were still closed. The plan was that my granddaughter and her brother would help socialize the puppies when it was time. My granddaughter's whole life at that time centered on the puppies and the need to socialize them. The whole family was commended on what a wonderful job they had done on those puppies. A vet who saw to one of the adopted puppies stated that he had not seen a puppy that young to be so well socialized. When it was time to let the puppies go to new homes, you can be assured that the tears did flow. The two puppies closer in are now part of the family - Piglet and Milkshake. Shiver, the third puppy in the back has gone to his new home. What I wanted to show here was a treasured moment in life. 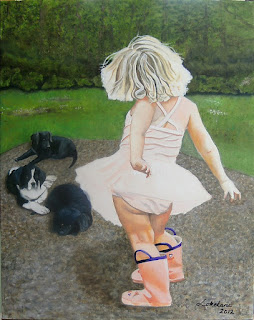 Let me go back in time, starting with 2010 when her uncle commissioned the same pose but with specifics, like that exact color green ??? 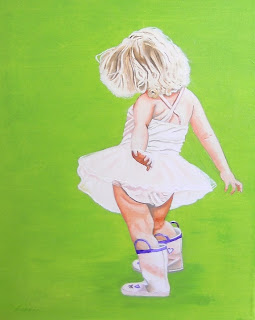 In 2008 I did the first of three paintings of this pose of my little granddaughter - she was about 3-1/2 at the time and I entitled it Captive Audience. Some may remember this particular painting. 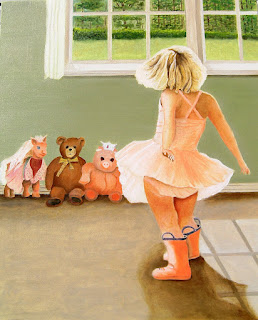 For me, it was a realization of how far I've come in my painting skills since 2008.
Posted by Lokelani Forrest at 10:45 AM 4 comments: