My post this time is a little different. Last week I had the privilege of participating in a women's retreat entitled Women Anointed, Redeemed. You will notice the bold letters spell out WAR ... we are in fact at war, a spiritual war that we are all facing. Our "war cry" was "I am a child of God, I am a woman of faith, I am a soldier of Christ." The retreat was held at the Billy Graham Education Center - better known as The Cove - in Ashville, NC. An amazingly spiritually uplifting place where you find yourself close to nature, thereby close to God.

I took pictures and want to share some of them with you. 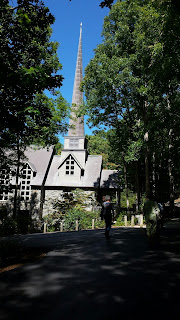 It was an amazing time. A time to reflect on your life, your beliefs, and to have your spirit lifted.
Posted by Lokelani Forrest at 12:55 PM No comments:


Knowing I needed to practice my "realism" skills I immediately remembered that I had saved a picture on my computer hard-drive of some very sweet people. My friends Joyce and Clyde Bell. The process went so smoothly that I just felt as though this painting was meant to be done. I told them I had done a seascape (knowing that Joyce loved sea scenes) and wanted to bring it by.


I am rather pleased with how it turned out and the biggest reward for my efforts was their reaction to the surprise. Here's a photo of the unveiling. 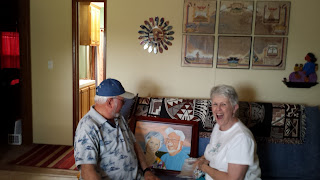 Thanks guys for being such good friends.

Posted by Lokelani Forrest at 2:39 PM No comments:

Again I find I must apologize - I cannot believe that I have not posted here since March 7th. I keep telling you that I'm going to do better, but do I?  No!!  I would have to say that is a pretty poor way to keep those who follow my blog interested.

However, in defense of myself, for some reason I have not been motivated to do any of the activities that I usually enjoy. Such as painting.  When I discovered this picture I was so taken with the sweet innocence it portrayed that I just had to do a painting of it. Got it sketched in, did the underpainting, and started laying in the color.  It was at that point that I - just like an inch worm - inched through it until finally I felt I could call it finished. The background may appear unfinished, but that was the look I wanted it to have - blurry but clear enough to give the viewer the idea of what they were viewing.  I wanted the main focus to be on the boy, his flute and his "audience."  I hope I've accomplished that.

I've titled it "Music Soothes ...."  I'm not too pleased with that title so if you have a better one, let me know. 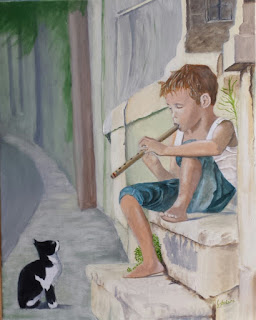 Until next time, mahalo for looking and I will try to be better about posting more regularly.
Posted by Lokelani Forrest at 11:03 AM No comments:

As a young girl growing up in Hawai'i it was expected that I and my female siblings would learn and perform the hula.  That's the way it was in the other families as well.  Here are some photos of those days so many years ago.

In ancient Hawai'i; however, women were not allowed to do the hula.  It was an activity reserved exclusively for the men.  The men chosen would reside together in a common residence, devoting themselves totally to the art of dance.  The men continue to dance and it is those dances that I most look forward to when attending a hula festival - such as the Merrie Monarch Hula Festival.  The men's dances are so powerful.  Here is a video clip of one such dances featuring the Academy of Hawaiian Arts.

This is a hula halau (dance school) out of Oakland, California.  Mark Kealiihoomalu is its kumu (teacher).  They are an amazing group.

Hope you enjoyed that and thank you for visiting.
Posted by Lokelani Forrest at 10:00 AM No comments: