WOMEN OF THE BIBLE - Ruth 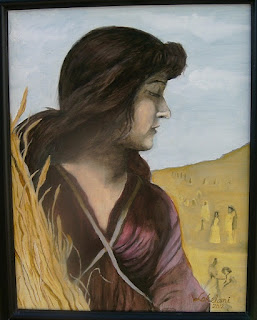 Due to health issues I have not posted to this blog in quite a while. However, as soon as I was able to I got back to my easel. I have decided to do a series of paintings centered on the Women Of The Bible - women whose lives have impressed me. I was inspired to do this series after a study that I did with my Sunday School class on Ruth, the Moabite woman who gave up everything familiar to her...her culture, her family, her god to follow her mother-in-law Naomi back to Bethlehem, after the loss of her husband and two sons (one of which was the husband of Ruth). I was very taken with the character of Ruth and her sweet spirit, that it was hard to realize that she came from a pagan culture of peoples who sacrificed children to their pagan god. Other women I have in mind to do are; of course Mary the mother of Jesus, Queen Esther, and mustn't forget Eve - the mother of all living.
Posted by Lokelani Forrest at 12:55 PM 6 comments: