Again, I have not posted to this blog in quite a while and I apologize to those of you who follow me.  Time has moved so fast these last few months.  But today I thought I would post about two weeks out of the time since I was last here.  That, for shame, was way back in February, four months ago.  I’m not even going to say that I’m going to do better.  I did that last time and it didn’t seem to make a difference.
Anyway, the two weeks I am referring to was in April - specifically April 18th to May 1st.  I went to Hawai’i for a two-week vacation after nearly five years of being away.  Fortunately, it was during the time of the Merry Monarch - a hula competition that happens every year with hula halaus (schools) worldwide.  Most of the worldwide was from “stateside” (continental U.S.) and Japan.  This highly anticipated competition is attended by thousands.  Beside the actual competition; the food and crafts are amazing.  For someone like me who has been away from that for years, it was mesmerizing to hear the chants and the beat of the ipu heke (gourd drum with a top section). Seeing the different halaus perform took me back to a time when I was young and agile enough to be able to do those beautiful hulas.  Not only did I partake of a feast for the eyes and ears, but also a feast for the “tummy.”  Food that I have not enjoyed for years.  It was all so ono (delicious) and I made sure I had everything I had missed.  Surprisingly, I only gained a couple of pounds - Yay!!
Let me
share a few pictures with you. 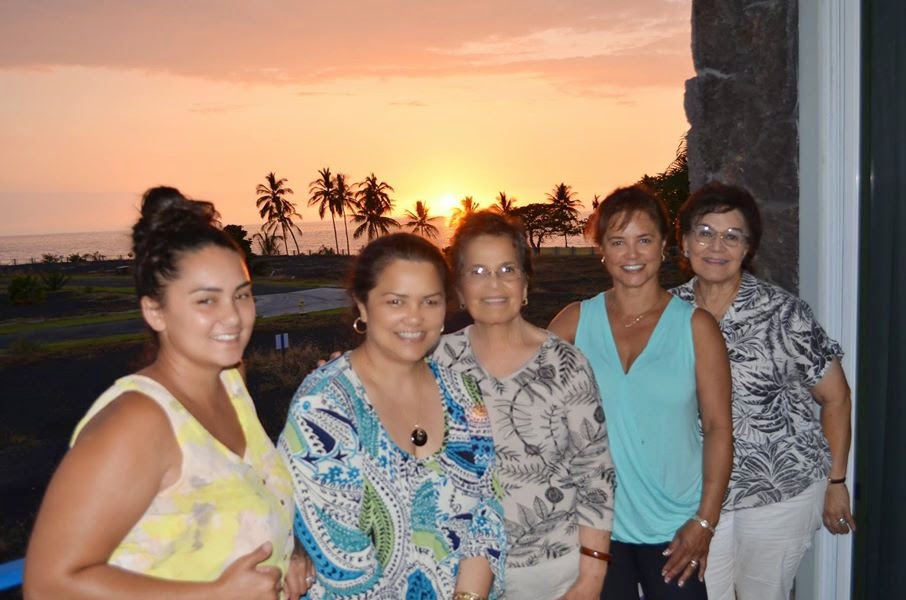 Isn’t that beautiful - of course I mean the sunset.  This is “ohana” (family).  I’m the one in the middle flanked by my nieces and sister on the right end.  I had such a wonderful time with them.  My sister came from Oahu (“off island”) and my niece next to her flew in from California with her husband.  We are at their timeshare in Kona, on the Big Island (Hawaii).

I had other pictures I wanted to post; however, I had trouble posting these so thought I'd quit while I was ahead.  Hope you enjoyed them.  Now I'm going to do some painting.
Posted by Lokelani Forrest at 2:28 PM 4 comments: