It is December 31st, the last day of 2009; therefore, my last blog for the year. My prayer is that the year 2010 will not be as frightening as it is beginning to be, i.e. terrorists attempt, a shaky economy, and talks of more government control, which could eventually lead to a one-world government. What are we in for? I have no idea, but I know that God is in control.

Putting the negative aside, my blog today is about hope and a more enlightened year, at least for me, by broadening my walk with God. Part of that walk is praising and glorifying Him with my art. I have just completed, short of a few minor tweaks, two paintings that speak to his magnificence. I’ve posted them here before, but that was while they were both still in process. Here they are again: 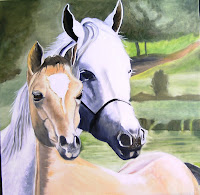 The horses (18x18 oil on stretched canvas) were done at the request of my four-year old granddaughter. She absolutely loves “Ponies” and wanted this one to hang in her bedroom. She knows that God created them just as He created her. 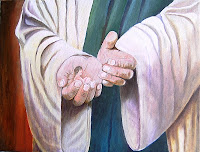 The second painting (14x18 oil on stretched canvas) I call “Safe.” This one was done at the request of a friend who said she had this on her mind for days and thought I would like to paint it. She gave me her idea on a 3x3 post-it note. We are promised a safe haven with God the Father and the Son if we but believe and accept.

While waiting for these pieces to dry so that I could put in the last minor touches, I decided to do a sketch. I looked through pictures and photos that I have in my “library” and this one jumped out at me… 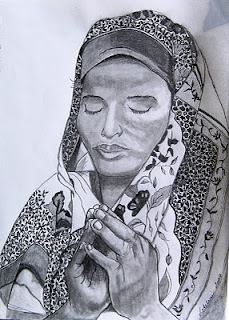 In Prayer
(9x12 graphite)
So, my friends, family and blog followers (you are also my friends)…my prayer for you in the coming year is love for one another; strengthening your faith, and remembering those in need - physically and spiritually. I will pray for much more for you. May you have a wonderful, prosperous and love-filled year.
Posted by Lokelani Forrest at 11:13 AM 10 comments:

Here we are, the day after Christmas, sorting through pictures, gifts, cards, thoughts and reflecting on the day of the celebration of the birth of the Christ child. I live in a "Mother-In-Law" apartment attached to my son's home (why do they call it that; why not "Mother's" apartment - I've often wondered that)and in the past four Christmases that I've lived here; one of the children always knocked on my door at the outrageous early hour that little kids are up and chomping at the bit to see what Santa has brought for them. This year I fooled them...I set my alarm and my coffee pot for that outrageous Christmas morning hour and was in front of the tree dressed for Christmas morning with my cup of coffee waiting with my daughter-in-law and 8-year old grandson for everyone else to wake up. First came my 4 yr. old granddaughter being prodded along by Jack. My son dragged himself downstairs looking frazzled and worn out to the enth degree (he was the "bicycle-put-togetherer" and Santa's helper the night before) some 30 minutes after my arrival and my 18-yr. old grandson had to be strongly coaxed out of bed by dad much later when we just could not make the little ones wait any longer. When we were finally all gathered, cameras ready...it began. It was so fun watching the little guys open their presents from Santa and family. 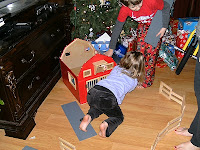 Here's my 4-yr. old granddaughter trying to get ALL of her "ponies" and farm animals in her barn. She said to us..."How did Santa know to bring me the barn, I didn't ask him for it?" We perpetuated the myth by telling her that he knew what she was thinking. She is so into animals, especially horses and was absolutely thrilled with her barn and animals. She told us that when she grows up she's going to be a Vetenarian, sing and play all the instruments just like dad, and be an artist like Tutu (that's me - grandma). 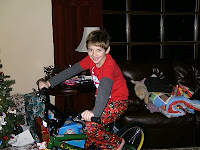 Jack is 8-years old and this is his first Christmas knowing that Santa is make believe. When he first learned that several months ago he was very sad over that fact. After all presents were opened I asked him how he like playing Santa this year he said it was sooo fun. He outgrew his first bike so mom and dad got him a larger, fancier John Deere bike. 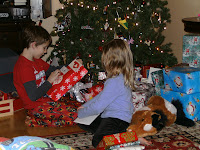 Ellie and Jack made sure each package went to the right person. 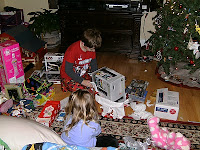 Surprise of surprises...Jack opening his X-Box. He had no idea and couldn't imagine someone giving him X-Box games by mistake...mom assured him it wasn't a problem and that it could always be exchanged for PS2 games...when all of a sudden Santa - in the guise of dad in his pjs - brings in a present he found in the hallway. I wish I had had my camera ready to get the expression on Jack's face when all the wrapping was ripped away...then came the tears of unbelievable joy.

Where is Jacob (the 18 yr. old) in all of this...you may ask? Laying on the bean bag covered up with a quilt. I couldn't get a decent picture. He was very much an active participant; however, in that reclined position.

That's what Christmas is all about...the children. Even when they know what the season is all about, the presents take a front seat for that time, but they remember to wish Jesus a happy birthday!!!

I pray you all had a wonderful Christmas and didn't forget to wish Jesus a Happy Birthday and to thank His Father, God almighty for His Son. I love you all and thank you for following my blog.
Posted by Lokelani Forrest at 7:58 AM 2 comments:

My last posting was a commission piece for a dear friend. This piece is a labor of love...love for my Lord and Savior, Jesus the Christ for whom the celebration of His birth is what this season is all about. 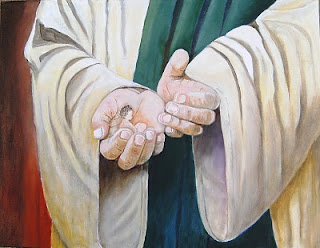 The concept of the painting came about when one of my lady friends from my church handed me a post-it note and said..."This picture has been on my mind for days and I thought maybe you would like to paint it." There on a 3"x3" note paper was this tiny sketch. I took it and came up with this...very close to the initial sketch, but this is what I was led to do. Although there is still much to do on it I wanted to post it today in celebration of the birthday of Jesus. I call this painting "Safe"...from Proverbs 20:25..."whosoever putteth his trust in the Lord shall be safe."


This painting has gone through a few renditions. This is my initial sketch, which I thought..."well, that's looking pretty good...I'll put it on canvas." Much to my dismay after laying in the paint, folds of clothing, hands...the whole works, I thought to myself..."no way can the left hand comfortably be in that position." That meant, removing His hands and most of what I had already painted and start over. I did that twice, until in frustration I had my 4-year old granddaughter take a photo of my hands in the position I wanted in the painting, and voila...here we are.

Sometimes life is tough and in our frustration we throw our hands up and say..."forget it." But, we need to hang in there, just as I did with this painting and something beautiful will surface.

Much love to all of you this wonderful Christmas Season. Celebrate with thanksgiving the miraculous birth of Jesus Christ who loves us all unconditionally. That with His love we will show our love for one another.
Posted by Lokelani Forrest at 9:11 AM No comments:

This is the piece that has kept me at my easel for the past 2-3 weeks. It is to be a surprise Christmas present for my friend's husband. He wanted this portrait done and especially wanted it done in black and white. I have never done an oil portrait in black and white before so needless to say, it was a challenge. I am pleased with the results and only hope she and her husband will be pleased. 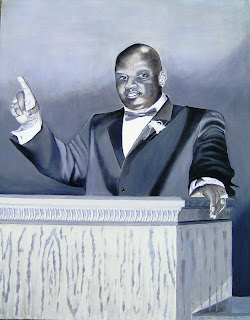 All that's left here is my signature then it is on to couple of paintings I've had on hold.
Posted by Lokelani Forrest at 10:57 AM 4 comments: