My last post was July 2nd. It is now July 20th. A little more than two weeks, but not much considering the fact that I have been under the weather for the past week - actually side effects from a new medication my doc wanted to put me on.

Anyhow, thought I would post this triptych I did for an art competition back in 2010. The competition was sponsored by the First Baptist Church of Nashville. It won the "Purchase Award" which was worth $250. That was a surprise as I didn't expect to win anything. The prize money, to me, was not as rewarding as the fact that the painting was recognized. The painting had to reflect the theme - The Return of the Prodigal.  I don't remember the exact size, but it was pretty large after all the pieces were put together. Here's that piece.

I tried to be as authentic to the time as I could. I know the actual story tells of how the father went way beyond the protocols of behavior by hiking up his "skirts" and running down the road to meet his once lost son. Composition-wise this was the only way I could show all three main characters - had to include the disgruntled older son.

Well, that's all I have for now. Hopefully I'll be able to work on my current WIP (work in progress) and post it for you in a couple of weeks.
Posted by Lokelani Forrest at 11:15 AM No comments:

Hi Y'all. Well my commitment to post every two weeks has already gone awry! My last posting was in May - at least it was this year. I won't make excuses, I messed up.  However, I do want to get back on the bandwagon and try to do better.

I do have a painting on my easel which I started on May 29th. My son, who is a professional musician plays lead guitar with the mega-popular country music band Alabama. He was in performance when a fan snapped the photo I'm about to post. I found it on Facebook and was so impressed with the impact the photo made, that I decided that I would challenge myself and paint it. It's the largest I've ever done - 30x24. I think it was the way the light fell on him that made the photo so impactful. Anyway, below is that photo. 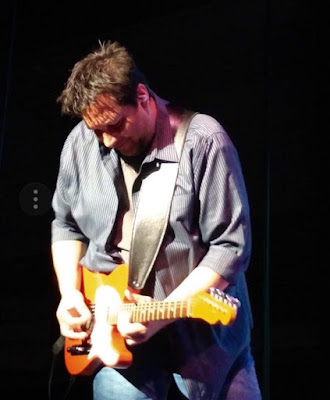 I have done quite a bit on the painting, but it has a ways to go to be considered finished. It definitely has been a challenge, but it has been "fun" to do. I'm not going to post WIP photos, will finish it before I post.
So, so long until next time!


Posted by Lokelani Forrest at 8:36 AM No comments: