Today is September 11..."a date that will live in infamy!" These were the words spoken by President Franklin D. Roosevelt when he reported to the nation the deliberate attack on Pearl Harbor in Honolulu, Hawai'i by the naval and air forces of the empire of Japan. Those very same words ring even truer for what is described as the most brutal attack ever experienced on our country's soil. On this day all over the country, this horrific attack is being remembered in some way. I choose to remember it here by the posting of a newly completed painting.

Some of you may remember the drawing I posted to honor the July 4th holiday - I had plans to paint it and I have. For some reason it has taken me a longer time than usual to finish this painting (this is 18x24 on gallery-wrapped, stretched canvas). I've entitled it "A Moment With God." I chose that title because behind the photo I saw a scared kid, who needed the reassurance that he would be alright. 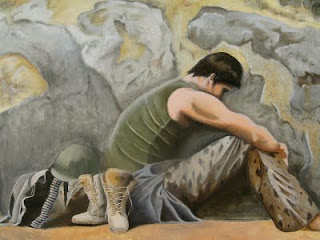 Some of you may know that my son is a professional performing musician. He returned home from his latest "gig" and looking at the painting said: "We just did this gig for an Army training facility (he told me what the name was, but I don't remember)." He went on to say that, "as I looked out over the audience - hundreds of soldiers who were just kids - it hit me that these 'kids' were being trained to protect my kids and they don't even know them. That scene made a huge impact on me."

May God bless us all.
Posted by Lokelani Forrest at 12:43 PM 4 comments: