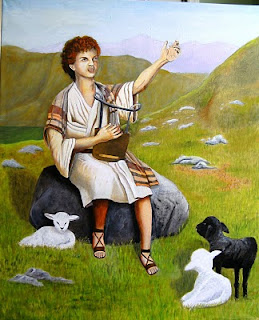 This is my latest. Major changes, as you can see. The mountains just seemed to overwhelm David and I just felt that had to be changed. I did not want to detract from David. I did finally give him sandals. Still not ready to sign, need to live with it this way for a while.

Mahalo for following this project. Will be back soon with the finish.

> There are 3 ways you can make a real difference to this blog.
1. Share the link to this site with just one other artist, art collector, or someone who would be interested.
2. Post your thoughts in the Comments section.
3. Email your ideas and/or suggestions on what you would like to read/see more of to lokeforrest@comcast.net
Posted by Lokelani Forrest at 8:16 AM 8 comments:

As much as I wanted to put more time into this project, time was pretty limited last week and it doesn’t look any better for next week. However, that being said I decided to learn more about King David’s life during those times that I wasn’t painting. I thought it would make this painting more real to me.

I started reading about David in the Bible with the book of 1 Samuel. David makes his appearance in 1 Samuel 16, after God has rejected Saul as king over Israel and sends Samuel to Bethlehem to the home of a man named Jesse. The Lord told Samuel that He had chosen one of Jesse’s sons to be king over Israel. Jesse had seven of his sons pass before Samuel and none of them “passed muster.” Samuel asked Jesse, “Are these all the sons you have?” Jesse replies that there was still the youngest, David, and he was out tending the sheep. David was sent for and all activity halted until his arrival on the scene. On David’s arrival it is said that…” he was ruddy, with a fine appearance and handsome features.” In researching him even more on the Internet…I discovered that he is supposed to have had red hair and some paintings of him from way, way back show him with red hair, so I have given my David red hair.

The story of King David from the time of his anointing to the time of his death in 1 Kings 2 proved to be very, very interesting. He reigned as king for 40 years…33 of those years was as king over all of Israel. Although I’ve known of David and his exploits, i.e., Goliath, Bathsheba, etc., and read about him in the Bible before…reading about him this time, I seem to have learned much more in depth about the boy David then the man than I had ever known before. Did it help me with this painting? It most certainly did. 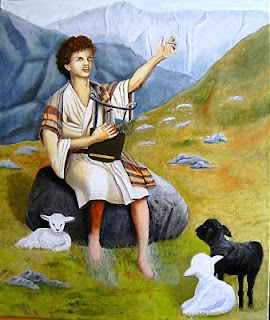 Sing Praise
24x20 oil on stretched canvas
I still have quite a bit before considering this piece finished. I’ve changed his mouth to make him be singing. Not sure whether I like the mountain directly behind him or not. The pasture area needs work and I’ve got to put his sandals on him. Also, still need to work some on his clothing. His legs sure gave me problems. Thank goodness, with my son’s help and posing I think I got it now.

This is where I am now. I’m hoping to work on him some today.

> There are 3 ways you can make a real difference to this blog.
1. Share the link to this site with just one other artist, art collector, or someone who would be interested.
2. Post your thoughts in the Comments section.
3. Email your ideas and/or suggestions on what you would like to read/see more of to lokeforrest@comcast.net
Posted by Lokelani Forrest at 9:50 AM 6 comments:

Update to the David Project

This past week has been quite hectic, so I have not been able to put as much time into this project as I would've liked. What little I have done, I will post here. Hopefully the upcoming week will be more productive. 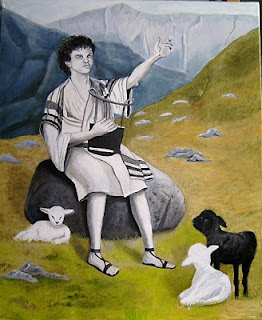 I have worked on bringing the intensity of the mid-range mountains down and glazing down the far mountain to put them more in the distance. I have problems with edges, so will focus on which edges should be soft and which should be hard. I put more detail into the grassy knoll, which still needs work, and some detailing on the lambs. Worked some on the cast shadows, but don’t know if I’ve rendered those realistically enough. I have reference pictures to work from, but none show me how the cast shadows should be rendered. Of interest is the indentation in the hillside of the grassy area…that was accidental, but I think I’ll keep that in…of course rework it some. This week I do want to start laying in the color on David.

Hmmm…it’s been a while since I posted about Hawaii’s past and legends. Will try to think of something interesting for next time.

Also, I want to say how much I appreciate the comments made by those of you who visit here.

> There are 3 ways you can make a real difference to this blog.
1. Share the link to this site with just one other artist, art collector, or someone who would be interested.
2. Post your thoughts in the Comments section.
3. Email your ideas and/or suggestions on what you would like to read/see more of to lokeforrest@comcast.net
Posted by Lokelani Forrest at 2:55 PM 11 comments: