Omigoodness - it has been a while since I posted anything and I apologize for being so delinquent about that. I have not been painting, but have been doing other things. For instance, those of you who follow my blog know that I also scrapbook and make cards. Well, I've combined cardmaking along with my art.
Let me explain. My granddaughter Ellie is going to be 8 years old (I can't believe it and don't want to) next week - she knows I make cards and she does as well. She has learned to use my supplies and knows how to create and produce her own cards. Anyway, she came to me last week and asked me to make her a birthday card filled with all kinds of animals. So, she loving animals as she does and having her own animals I decided to create a birthday card with ALL of her animals wishing her a happy birthday. I did a "theater-type" card....  This view is the front and back of the card. 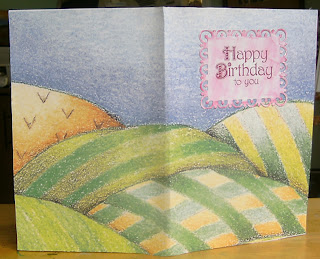 This view is when you first open the card - the theater. Yes, believe it or not she has 11 animals, of course they are family pets but she cares for them all and plays with them (of course not all at once) everyday. She calls them all by name and when she's out playing they (those that are around) will play with her. She does picnics with them, dresses them up and they endure it - at least some of them will. Five dogs, four cats, two pot-belly pigs - one grown and one "toddler." I've tried to portray them as close as I could considering I had to do them small and tried to show them relative in size. 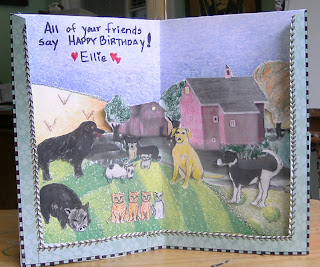 Then you open another page - this is where the greeting goes. 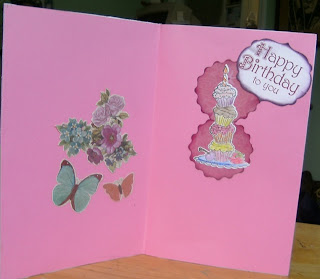 This had to be the most complicated card I have ever done, but also it was the first time I did one of these "theater" cards - instructions were from YouTube. It took me a day+ to finish it. Although it was quite a project, I enjoyed doing it and I know my granddaughter will be SO surprised and will love it. Methinks it is time to do another in my series of "Women of the Bible." I've been away from the easel too long.
Posted by Lokelani Forrest at 11:21 AM 6 comments: