Women of the Bible - Queen Esther

Now the king was attracted to Esther more than to any of the other women, and she won his favor and approval more than any of the other virgins.  So he set a royal crown on her head and made her queen instead of Vashti. (Esther 2:17) 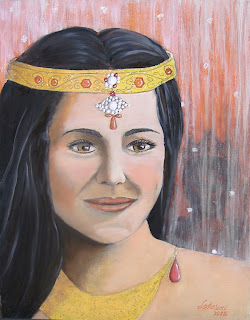 The third in my series of Women of The Bible.

Esther, whose Jewish name was Hadassah, was taken in by her cousin Mordecai after the death of her mother and father.  Mordecai and Esther were among those taken captive from Jerusalem by King Nebuchadnezzar.  Scripture tells us that Esther was "lovely in form and features" and when King Xerxes (Ahasuerus) looked upon her he was attracted to her much more than he had been to the other virginal young ladies brought before him.

The story of Esther is intriguing.  Esther was told by her cousin Mordecai not to reveal the fact that she was Jewish.  If you want to know why, you gotta read the story.
Posted by Lokelani Forrest at 9:06 AM 2 comments: