It has been a little over two weeks since I last blogged (actually 21 days). Have been trying to be more consistent about posting every two weeks, but having difficulty doing that. This time it was due to the fact that I wanted to finish this painting, then post it.

Anyway, the fan posted the photo on Facebook and it popped up on my feed (I think I posted it here on July 2nd. -  I'll post it again so that you can have a comparison.) I was so impressed by the photo that I decided to challenge myself and paint it. Here it is:


﻿
I started the charcoal sketch on May 29th and here it is August 9 and finally finished.
Here's the photo I took it from. Considered putting the stripes from his shirt in, but realized that it would've probably proved too stressful. 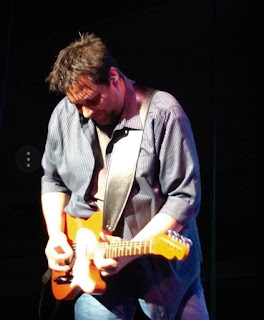 I'm thinking that maybe this will be the start of a series of musicians in performance ... hmm, good idea - I think. That's it for now. Talk to you next time, hopefully in two weeks.
﻿
Posted by Lokelani Forrest at 10:44 AM No comments: